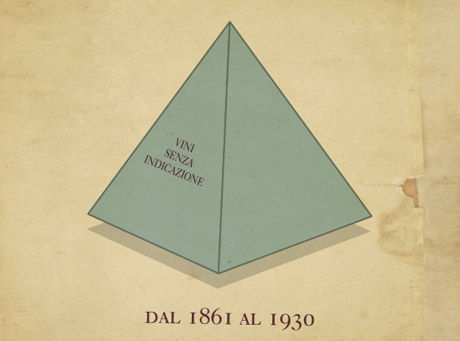 When in 1861 Italy became one nation, the rules relating to the wine world were certainly not equally uniform. From grand duchies and kingdoms to one nation: we can therefore say that at the time of the Unification of Italy, wine became “Italian wine”, although the concept of a bond with a single region, and particularly with its territory of origin, was still lacking.
It was not until the early sixties that we could see at last recognized the role, importance and image of products tied to the area as well as to the peculiar characteristics allowed by this bond. Going over the history of the Italian Wines with Designation of Origin we can see how the governments that followed one another in the newly formed Italian nation (starting as early as 1885) were concerned solely with issues related to ensuring the authenticity of wine, omitting, however, measures and solutions designed to protect the quality and origin of these productions. 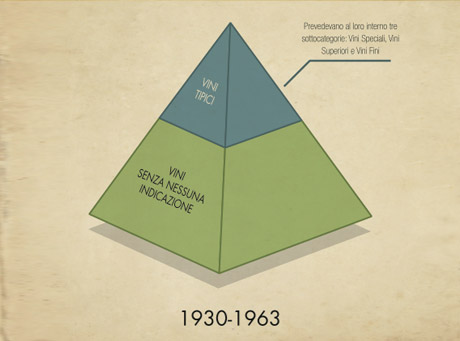 A first sign of change took place in 1930, when a regulation was issued which laid down the first indications for the protection of Italian wine productions.
The Ministry of Agriculture was given the task to recognize and define the areas of production of these wines.
A first qualitative classification of these products was also introduced by defining three important levels for the so called “Typical” (i.e. traditional local) wines, namely:

However, they were still rather sketchy indications which had no particular repercussions on the wine industry. 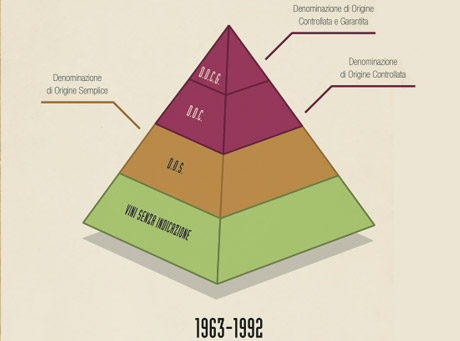 A radical change occurred in 1963, with the enactment of Presidential Decree No. 930 on the Protection of Wine Designations of Origin. It was actually the first national measure governing quality wine productions, which established the current concept of Designation of Origin, defining its meaning and strengthening the concept of tie with the territory.
This law sets very strict rules regarding the production and marketing of wines, such as the product specifications, specifically designed for each designation, the creation of specially provided registers for the recording of production surfaces and a system of reporting the quantity of grapes produced to be destined for the production of a particular designation.

The law also lays down a new system of classification of wines:

The first was assigned to the Vernaccia di San Gimignano, soon followed by other designation labels including Brunello di Montalcino, which in 1980 got the recognition as the first D.O.C.G. [CGDO] (Controlled and Guaranteed Designation of Origin).
The issuing of this regulation, which for over thirty years has represented a real cornerstone in the Italian wine growing and production industry, contributed greatly to the growth of our productions from both the qualitative and quantitative viewpoint.
In the early 90’s the wine growing and production industry felt the need to modernize the applicable legislation, which was supposed to face up both to the considerable growth in the number of Designations of Origin themselves and to the new market requirements. 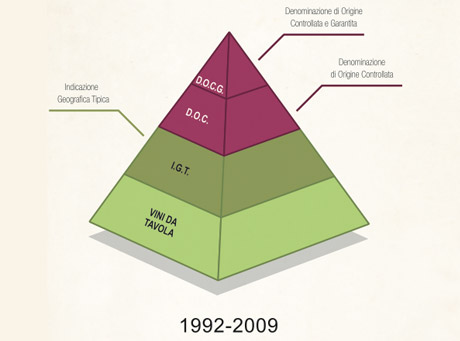 In 1992 Law No. 164 was finally promulgated which, while maintaining some of the guidelines of previous law No. 930, introduced some important innovations in the field. While on the one hand the general lines – based on the connection between wine and territory, on the other it was deemed advisable to include some innovations, including:

– Activity of enhancement of designations;
– Introduction of I.G.T. [TGIs] (Indicazioni Geografiche Tipiche, i.e. Typical
Geographical Indications);
– Harvest selection, which allows the possibility of using the production of the same vineyard for several Designations of Origin;
– Recognition of sub-areas, i.e. more restricted areas within the Designation of Origin;
– Mandatory introduction of chemical-physical analyses before marketing.

But the real novelty introduced by this law lies in its bearing layout, aiming at total quality meant in terms of origin and which was given concrete shape through the mechanism of the pyramidal classification of wines.
The national, or rather community, scenarios have undergone significant changes due both to new market needs and to the advent of new producing countries which, year after year, have become increasingly competitive. 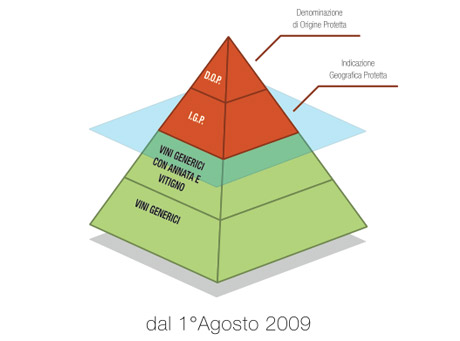 Based on this background, the European Community decided in 2008 to implement
a process of reform of the entire wine growing and production industry.
Said reform saw the light of day thanks to the issuing of Regulation No. 479 in
2008 and introduced some novelties with regard to rules governing production and
marketing, labelling, defence and promotion of designations on the international
scene and the introduction of a monitoring and tracking system that each Member
State may apply independently on its designations as a further guarantee for the
end consumer.
The reform plan also aimed at simplifying the legal framework, adopting clearer and
more transparent rules and equating the wine growing and production legislation
with the one already existing for other quality agricultural and food products with a
D.O.P. [PDO] and I.G.P. [PGI] label.

Only 2 categories of wine are then provided, namely:

The Italian State has in any case allowed the use of the previous acronyms which characterized the Italian quality wines (D.O.C.G. [CGDO], D.O.C. [CDO] and I.G.T. [TGI]), which can be either written together with the new ones or alone.
Page load link
Go to Top